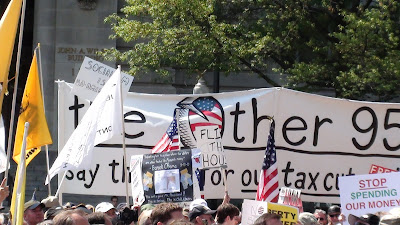 Writing on January 15, 2010, Glenn Greenwald at Salon noted Barack Obama’s new head of the Office of Information and Regulatory Affairs, Cass Sunstein, had championed creating fake websites and using outside 501(c)(3) interest groups to act as alleged independent champions of government policy and to “cognitively infiltrate” opposition websites, etc...Sunstein advocates that the Government’s stealth infiltration should be accomplished by sending covert agents into “chat rooms, online social networks, or even real-space groups.” He also proposes that the Government make secret payments to so-called “independent” credible voices to bolster the Government’s messaging
RedState.com had this to say about The Obama Administration Behind AstroTurf Anti-Tea Party Website
click on graphic:

There was a woman following the "Obama Admin AstroTurf" "the other 95%" three poled headless snake of a sign with her own poster that read "Tax The Rich". I wonder if she, or anyone else in the administration realize that you could tax the rich at 100% of their income for the next 10 years and not even pay off the interest on the National Debt. By the way, all of the pictures from the AstroTurf were from the Tax Day Tea Party. Funny how a White House propaganda machine was out in full force posing as their own grass roots organization. We need to expose this crap for what it is, every chance we get.

Be sure to stop by Mr. Sunstien/MoveOn.org' s little website and let them know how you feel.