The Wars That Broke The Piggy Bank, or not?

I'm so sick and tired of the rants from the left that the wars in Afghanistan and Iraq, Bush's wars, are what have put us all in the poor house. Now don't get me wrong, they didn't help us financially speaking, but that's not the reason we are where we are.
Our Federal Government has spent the majority of our accumulated borrowed money on other things, besides the wars.

The big bump in 2008 was of course the TARP bailouts, but Jeezus Freakin Keyreist, look at Obama's spending in 2009 and 2010. Are you kidding me?
By the way, these figures come from the CBO (That's the Congressional Budget Office for those of you that not only have no math skills, but also don't know what CBO stands for)
Spending us into oblivion and while Rome is burning, the liberals are fiddling, or diddling each other, not sure which.
From the Ludwig von Mises Institute: 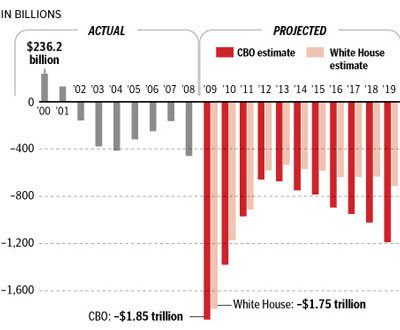