Obama's ultimate "Bug Out Bus"! Too bad we had to foot the bill. 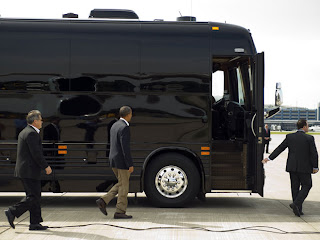 Originally published at Politico.com
The Secret Service has revealed to Talking Points Memo that the government has purchased two armored buses for use by President Barack Obama and Republican candidates in the 2012 presidential campaign and beyond.

The agency initially declined to tell TPM whom the buses were bought from, but based on some searches of federal databases it looked to me like the seller was Hemphill Brothers Coach Co. of Whites Creek, Tenn. Last July, the Service signed a contract for nearly $2.2 million with the firm, according to a federal procurement database. (The entry doesn't specify the number of buses.)

"The contract you found is the contract," Secret Service spokesman Ed Donovan said Thursday morning. "It's two buses for $1.1 million each."

In the past, the service leased buses and then tried to fit them with extra security gear. But that can't provide the assurance of starting from scratch.

"They're certainly going to be used for bus tours around the country," as well as other events, Donovan said. "When protectees go to remote areas, go camping or on a motorcyle trip, we''ll bring the asset out as a mobile security facility." (Kind of like a congressman's mobile office, I guess.

The final cost of the two new buses will exceed $2.2 million, because the Service prefers to add its own aftermarket security features to vehicles. Donovan said the service will do so in this instance as well.

The $1.1 million price tag is roughly in line with costs for custom-made, luxury motorcoaches. This company quotes prices of $1.5 million to $2.5 million for a new luxury bus.