Buy Gold, While It's On Sale 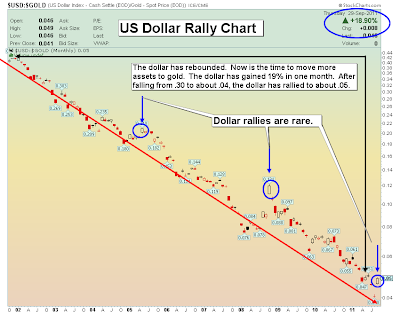 Dollar Commentary:
Smart investing is about taking advantage of situations when they arise, and there are plenty of opportunities right now. On the above chart you can see that the dollar has gained 19% against gold in the last month, after falling horribly for many years. This dollar rally is effectively an invitation to increase your gold holdings, and it is what I have done this week. Gold is quickly becoming my personal currency.

If a currency is diluted it loses purchasing power, both here and abroad. The buyer gets less and pays more. In the next few months the dollar appears headed down to the $65.00 area on the $USD index. This technical price action represents the fundamental of debt payment by dilution.

While the time of this actual quotation is uncertain, Jim Rogers has commented on the magnitude of the US debt with this statement over the years,“Europe’s got some bad problems but the entity as a whole is not nearly as deep in debt as the U.S. They don't have a huge balance of trade deficit, like we do.”

Our debt could turn into a crisis, and it could be a lot worse than what Europe is experiencing. Will Illinois, California, and New York be viewed by the rest of America like Germany views Greece now? Where does this all end? It feels like there is no end, and much more pain to come for many years.

The dollar rally already now appears to be starting a topping out process. This process that is topping the dollar is also creating substantial bottoming action in gold and commodities. I expect this process to take another two weeks. I want to own more gold while the “sale” is on. 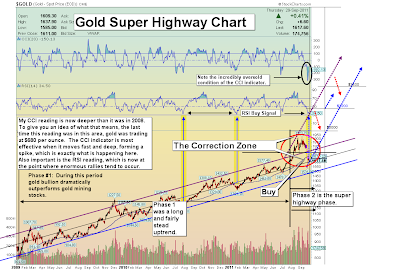 You can make the argument that chart damage has been done here. The small symmetrical triangle I highlighted last week failed, but it was a small technical formation; the big technical picture continues to strengthen. Gold has begun the journey to becoming the worldwide asset of choice in this crisis.

Massive Asian physical buying has come to the metals as a result of the three day correction that saw gold prices fall over 10%, and the Indian wedding season preparations are picking up steam.

A report was posted on Bloomberg several days ago stating that gold could go to $10,000 per ounce based upon the amount of money printed on a historical basis. That is prior to any additional QE programs. More printing allows for an even higher gold price. Many believe the US government will default on obligations. There really is no final target price for gold. Over time, governments will just keep printing paper currency to dilute their debts, as they have for thousands of years. It began with diluting gold coins with other metals. The space age has brought the electronic printing press. Gold is volatile, but the largest trend of the gold price over the longest time has always been higher, against government promise-backed currency.

I believe physical gold owners are the smartest of all investors.

To be in a market and to stay in a market, you must believe in what you own and know why you own it. Don’t buy something simply because the chart looks nice. Buy it because of great fundamentals. Use my technical buy signals to increase your core positions.